It is amazing when you look through the word of God and see how many times the Lord chose to speak to someone in a dream. We are told in Job 33 and other parts of scripture that God speaks this way, but do we take it seriously?   The voice of the Lord is so vitally important to His people because it is the fact that we hear His voice and follow Him that identifies us as one of Jesus’ followers.  Think about it, if we are not following Jesus, how could we be His follower?  In the message, which is more like a talk, we will focus on several instances where God speaks to several people in a dream and we get to see how things were before He spoke, how people responded to His voice, and how there were different outcomes for each person to choose to follow God in what He said.  From governmental employees who one day were working in government, then later found themselves in prison.  Some with false charges and some with real charges.  We will see how God spoke in dreams in these situations and show the outcome of each where some had a good outcome and one had a very bad outcome.  We will see how God told some who had murderous plans to kill them and told them where to go, how long to go, and when to come back to prevent their murderous plans.  We see how even evil government leaders though they do not know or acknowledge God, God can still speak to them in their sleep, in dreams and the voice of the Lord will change the direction of their government.  Again and again, through scripture we see them, but God did not stop speaking when Revelation chapter 22 was complete, yes, scripture was completed, but God has not stopped speaking in dreams and visions.  As a matter of fact, we will learn that dreams and visions will be a key way God will speak to people in the last days, which means, God will never stop speaking.   We are entering some very difficult days ahead.  Days of confusion, chaos, witchcraft, false prophets, twisted religion, and greedy merchants whose lust will never have their fill of money and power up until God deals with them once and for all, which He tells us about in Revelation chapter 18.  With all these dark voices and crazy chaos, we must be able to hear God’s still quiet voice, understand that He speaks and follow Him, for He will lead us through the days ahead with great victory. 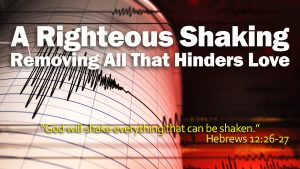 A Righteous Shaking, Removing All that Hinders Love